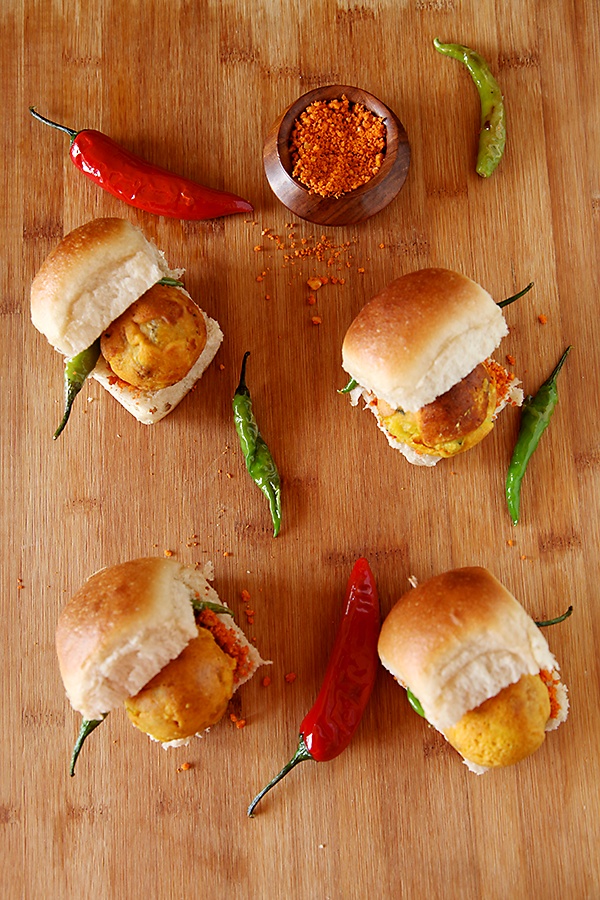 Although I do love an occasional vada pav at my favourite haunt selling these much loved snacks, I"m quite vary of indulging in it too often. The film of oil that coats the palate (often from reused oil) is not a pleasant experience for me and neither are its after effects that often make an appearance in the form of a pimple here or there. 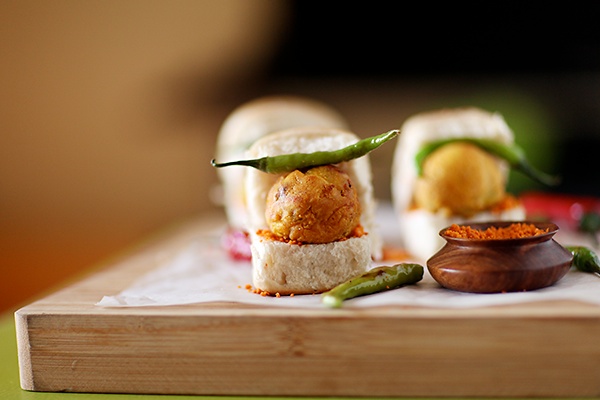 Known to have originated in Mumbai, this much loved street food, which is the Indian equivalent of a burger, makes its presence felt in most places throughout the Indian subcontinent these days. Apart from potatoes, pav (Indian style bread rolls) and spices, one of the main ingredients to make vada pav is besan- a gluten free flour made from channa dal or Bengal gram dal, for the uninitiated. 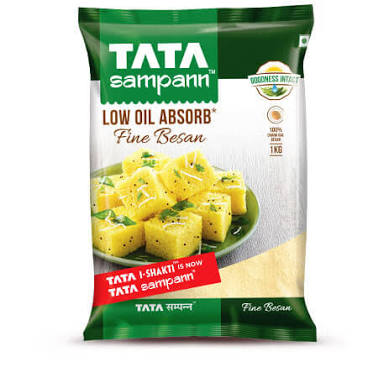 I first heard about the goodness of TATA Sampann besan from the folks at Tata Chemicals, when I was in talks with them for judging two of their events. This made me buy TATA Sampann besan to make my jalebis (coming up soon) as the organic besan that I use had specks of channa dal skin in the flour which would spoil the appearance and maybe the texture of my jalebis.

What sets apart TATA Sampann besan from other varieties of besan available in the market is its low oil absorbing properties due to the fact that the besan is ground from unpolished channa dal, sourced from the best farms in the country. TATA Sampann besan also scores high on the taste and nutrition factor. Already a fan of Tata Sampann urad dal to make my South Indian delicacies, Iâ€™m totally sold to using Tata Sampann besan now, after having used it to make several delicacies. 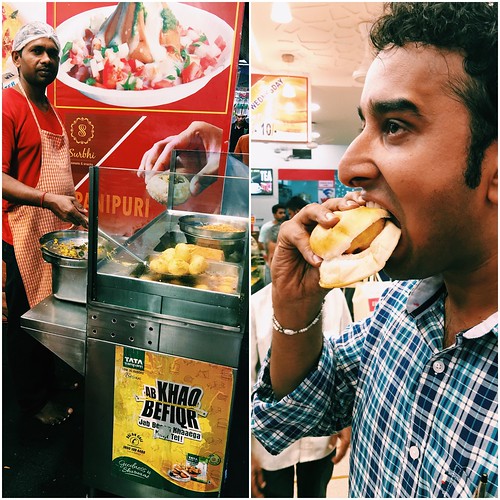 TATA sampann recently tied up with famous vada pav stalls and snack centres across Mumbai to give consumers a taste of the vada pav made with their high quality besan. I was invited to Surbhi Snacks in Borivli to witness this activity and I was quite impressed with the way the vada pavs were being sold by the minute here. The vadas made using TATA Sampann besan and fried in a temperature controlled fryer, were a sure fire hit with the consumers as I saw them fly away from the shelves one after another. 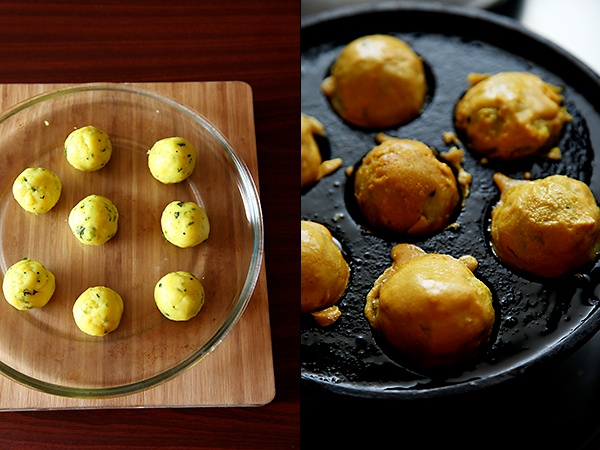 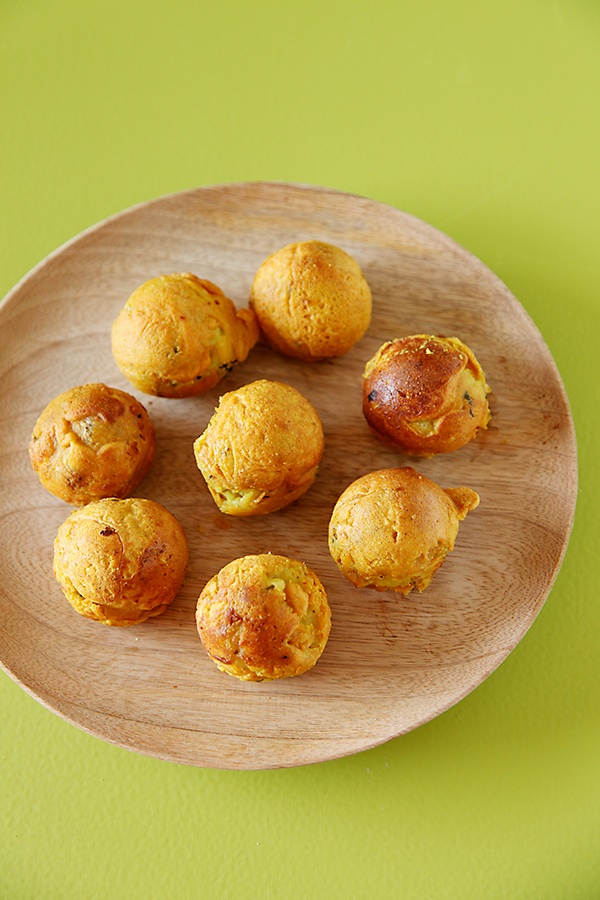 After being a part of this experience, I decided to come back to my kitchen and give you all a great recipe of this much loved Mumbai snack- divinetaste style! 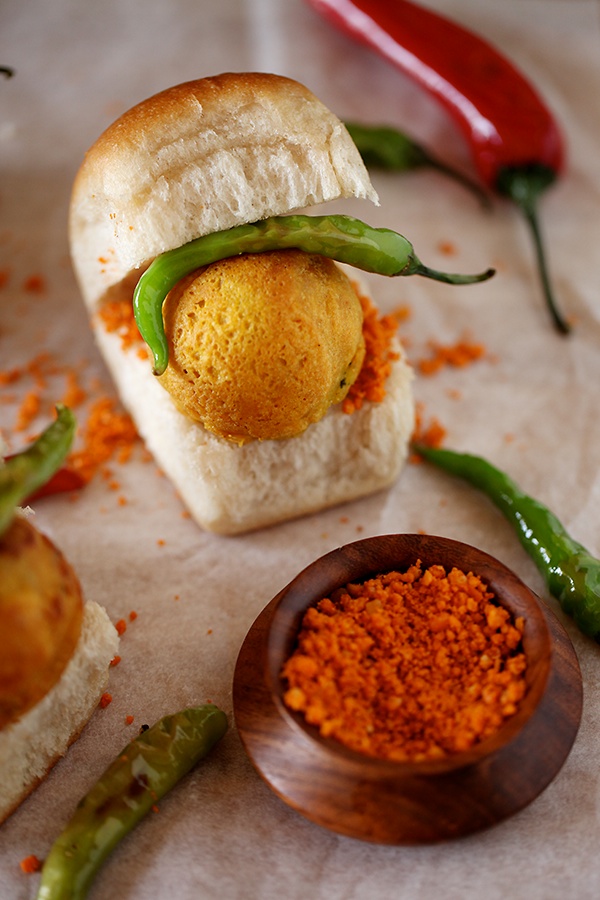 Since I was not deep frying the vadas, I was a bit skeptical of the outcome, but when Ro declared that this is the best vada pav he has eaten, all my doubts were quelled since this was coming from a hardcore vada pav aficionado (from his early Mumbai days). 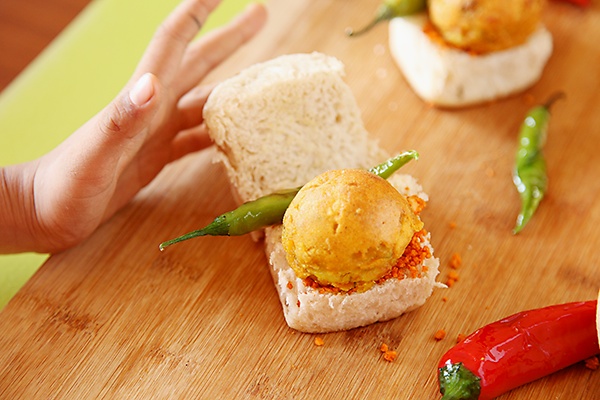 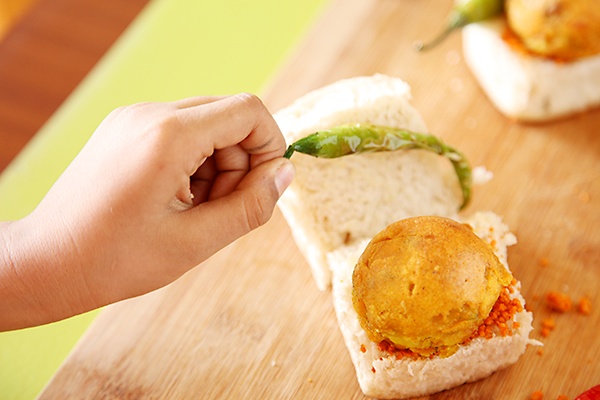 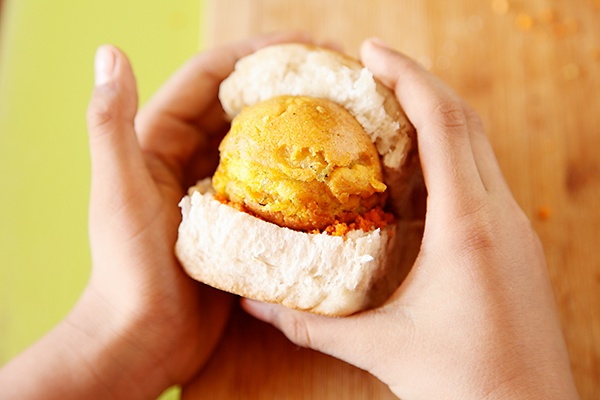 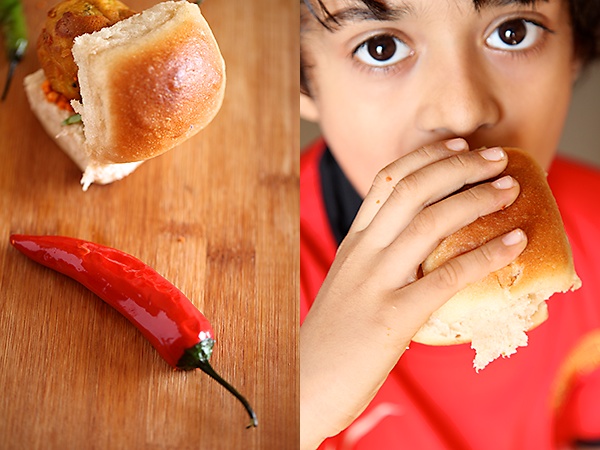 My now seven year old, who (my regular visitors would know) is a hard to please task master when it comes to the palate, finished his share after promptly removing a chili from his pav. 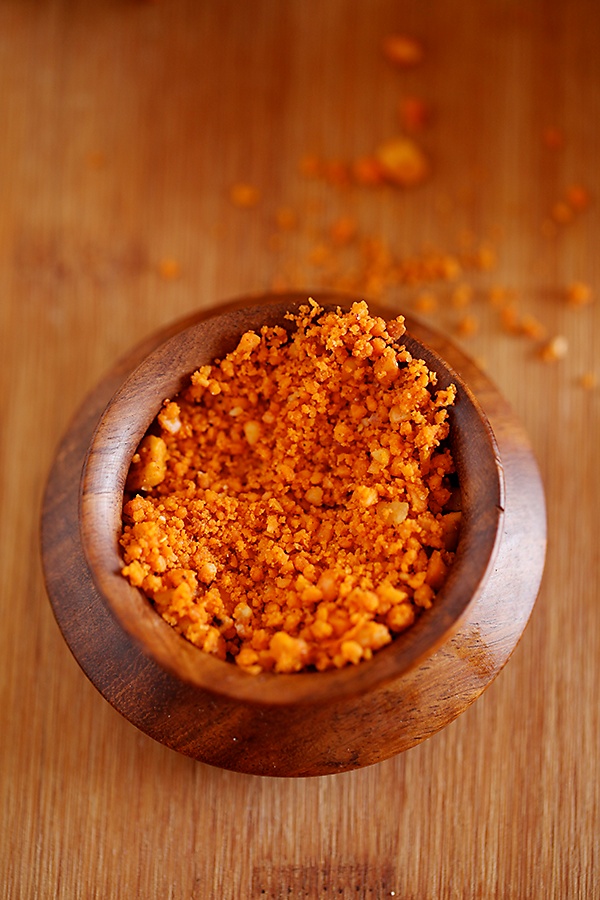 These vada pavs are a guiltfree indulgence without a compromise on the taste factor! And they are certified and kid approved too, which means that they make a great kiddie snackbox option. 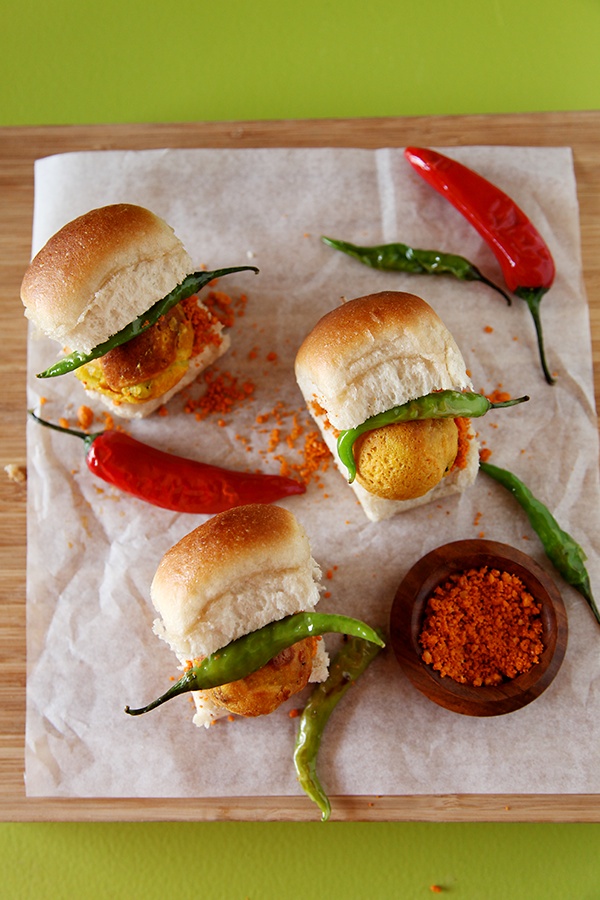 I can't wait for you to try this and experience the goodness yourself. The batata vadas are a treat and can be served by themselves with your favourite chutney and when stuffed between some whole wheat pav with a fried green chili, you are transported to a no strings attached street food experience. 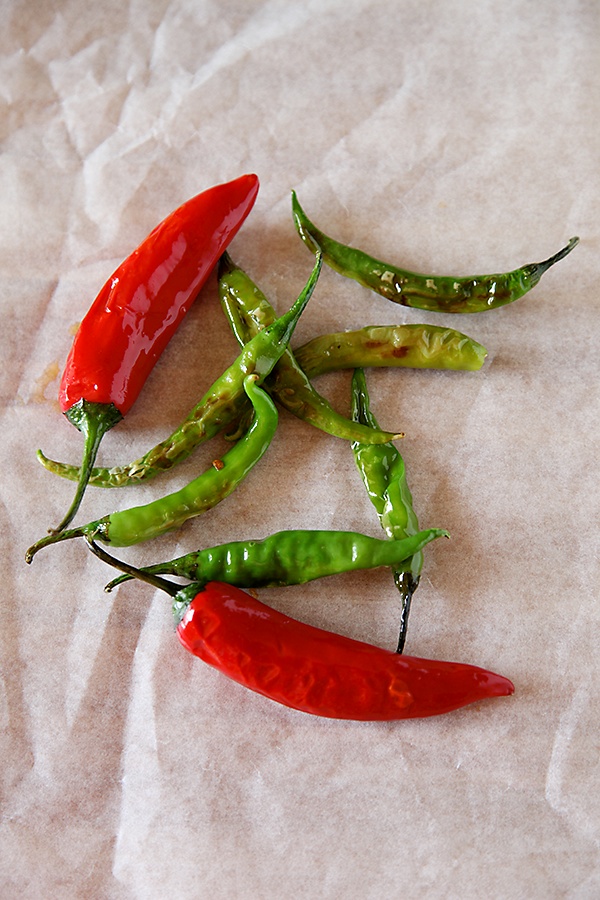 With this healthy and tasty recipe in hand, I can now indulge myself and my family to a great vada pav experience without any guilt weighing on the conscience. And the best part is that you can do it too!

Try and use whole wheat pav to make vada pav. If you don't have an aebleskiver pan, just use a frying pan! You can serve the vadas without the pav with red and green chutney.

To make the vadas, in a pan put in the oil and once the oil is hot, add the mustard seeds. When the seeds start to pop, put in the rest of the ingredients, the curry leaves, ginger-green chili paste, asafoeida powder and the turmeric powder. Put in the mashed potatoes, chopped coriander, salt and mix well. Cook for a couple of minutes more, turn off the heat and stir in the juice of a lime. Allow the potato mixture to cool down.

Make the batter
Combine all the ingredients for the batter together in a bowl and mix until the batter is smooth, thick and there are no lumps.

Make the vada:
Divide the potato mixture into 8 equal portions and shape them into round balls. You can make larger vadas, depending on the size you want.
Dip each ball in the batter, coating the vadas with the batter on all sides. Place the vadas in a hot appa chetty/aebleskiver pan or a hot griddle smeared with oil.
Cover and cook on a slow flame for 3 to 4 minutes, using a little oil to smear the sides of the pan.
Turn the vadas upside down, cover again and cook for another 3 to 4 minutes or till they turn golden brown in colour.

Disclaimer- This is a sponsored post. Rest assured, that I write only about products that I use and believe in.